This year we are celebrating the 20th anniversary of fall of the Berlin Wall. The basic idea for the “Berlin Wall Project, ” which consists of a concert dance work “Wallstories”, a site specific dance “Dancing with the Berlin Wall” and a short  dance film entitled “The Wall”is to reflect upon what the Wall and its removal meant to the Western world in its broadest sense. We forget this now but the Cold War constantly threatened to turn into a devastating atomic war.  No place captured this reality more than Berlin, Germany – a divided city on the forefront of the battle between East and West.  In the mid eighties, as a teenager in Berlin, I personally felt the threat of imminent conflict. This concern was an ever-present issue in conversations, meetings and demonstrations. This concern was also physically manifest in the form of the Wall, which both separated as well as divided East and West.  Initially, as a child, you were always aware of it as it demarcated freedom from autocracy.  Later, one simply learned to navigate around it.

Then, abruptly, the Wall came down. The world opened up. People, for the first time in decades, had a chance to communicate, to share, move and get to know each other, without feeling the oppressive threat. Being present during the fall and the celebrations at the Brandenburg Gate as well as “Checkpoint Charlie,” I still vividly remember the energy and hope that was present during the marching of thousands of East Berliners into West Berlin. Things continued to change after this point. Having been to Berlin last year, it was amazing to see how the presence of the Wall was altered. The East Side Gallery remained as a great celebratory creation. The Wall, the symbol of oppression and division, had been turned into a symbol of art and entertainment. There are many paintings on the East Side Gallery wall and on the West side, along the Canal, there is now a strip of dance clubs.  These simultaneously embody and trivialize the history somehow.

Drawing upon these observations and experiences, the soul of this project concerns the acknowledgement that physical and political boundaries play an important role in an individual as well as a collective’s life. They are conventions that have been created, adapted, and/or devised by nature and/or humans. So too, are a wide variety of other boundaries. These boundaries can act as national and/or international assets, but they can also act as impediments that restrict or prohibit the flow of resources, commerce, or intellectual property, or barriers that isolate people and divide nations. 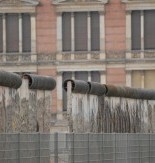 August 13th marks the 50th Anniversary since the B

August 13th marks the 50th Anniversary since the Berlin Wall was bild and we are bringing back Wallstories. Wallstories will be performed as part of the 15th Anniversary of the New York International

Dancing with the Berlin Wall

Since the beginning of the Berlin Wall Project, I had the idea, that on the day of the anniversary, we would do a site specific version, to give the audience more of an immediate feeling of the...

It’s one more week and we are getting to the last part of the Berlin Wall Project. Witnessing just the premiere of Wallstories in Washington DC was a strange feeling. It was a surreal experience...

In search of an answer I invited the audience o help us out. This week, on Friday, we had our 4th edition of the informal discussion at the Goethe Institut NYC entitled Words on the Wall. I invited my dancers to show a section of Wallstories which has it’s world premier next week in the Gallery space.